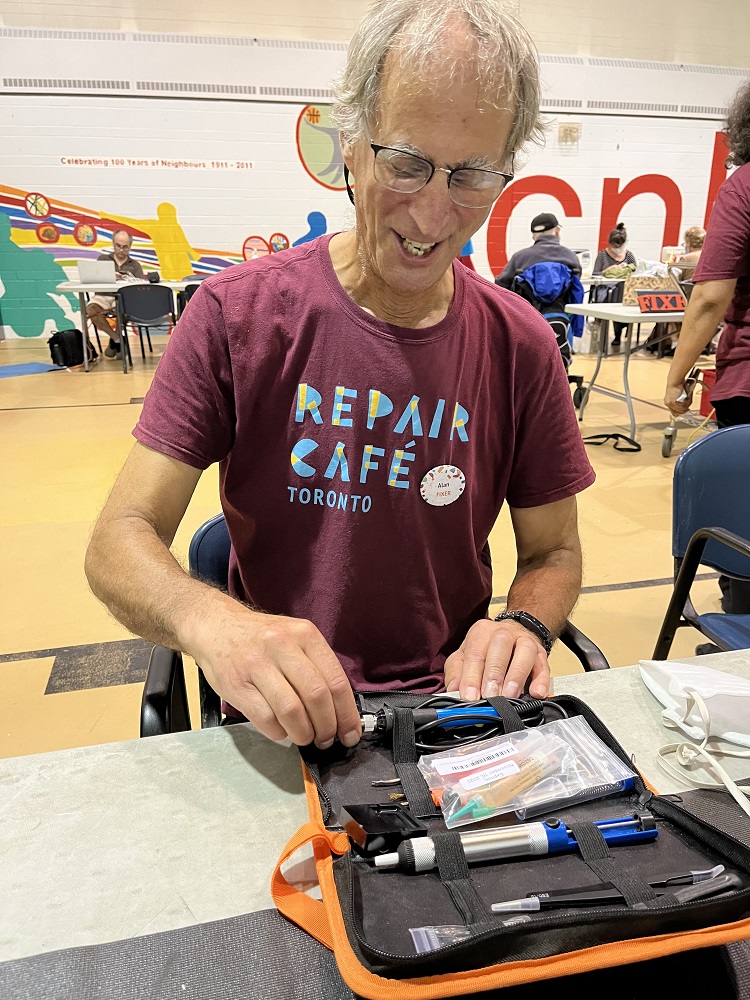 What kind of items do you fix?
Mostly household and kitchen appliances, radios, vintage VCRs and CD players and any electrical or electronic device.

When did you first start volunteering with Repair Café Toronto?
Maybe 5-6 years? Stupid pandemic put a hole in that.

What is your day job?
I have been retired for 4.5 years. My last job was at UofT, Physics department, making equipment for the quantum mechanics research labs. Before that I was in telecom as an RF engineer.

What is your favourite location?
If I had to chose, the Toronto Reference Library has the nicest venue. Places such as St. James Town are more accessible and the people are very appreciative of having any items repaired.

Do you have a favourite quote?
“If it ain’t broke, don’t fix it. If it is broke, fix it.”
Although not repair related, I chuckle at “You are immortal until proven otherwise”. (anonymous)

Why did you start getting interested in repairing things?
I have always been making things, from push carts as a kid to anything that interested me, to various degrees of capability.

How did you learn your skills?
I went to what is now called Toronto Metropolitan University for electronics and never looked back. That was just past the tube era, overlapping with the first IBM and Apple computers. Part of the job was keeping up with the changes, each one based on previous changes. A lot of electronics is learning on the job.

What does it mean to you to volunteer at Repair Café Toronto?
I enjoy doing a simple repair to something instead of having it being thrown out. That is reflected in the people bringing things in for repair, a very common comment. Many people can’t afford to just buy new stuff so we keep things running as long as possible.

What is the most memorable item you have fixed?
Definitely was a Kitchen Aid stand mixer. The two ladies came prepared. They had downloaded the iFixIt.com video on how to dismantle the mixer, they printed the instructions, had a replacement gear for the expected broken part, and popsickle sticks. Once it was fully opened, they used the sticks to carefully remove every shred of of the broken gear from the large amount of grease. The new gear was put in, the grease was put back, the mixer was reassembled and it worked, thanks to their preparations.

Why should people get involved with Repair Café Toronto?
Besides keeping things out of landfill and otherwise having to buy new items, there is a feeling of community, of helping.

Where do you see Repair Café Toronto in five years?
I hope that Repair Café grows even bigger, that it becomes a well known event. Not enough people know about the Repair Café. There are many people who both would be fixers and would bring in items for repair if the Repair Café was as ubiquitous as libraries. Maybe Repair Café can be affiliated with TPL and have permanent or semi-permanent locations?