Broken blender, headphones and blow dryer? Not a problem. These items were among the many items brought in by the visitors to the Repair Café on April 22. Held at the Parkdale Toronto Library, the café was another successful café with a great turnout of volunteers and visitors. Our dedicated fixers worked with the visitors one on one and walked them through the process of trouble-shooting and fixing the items. 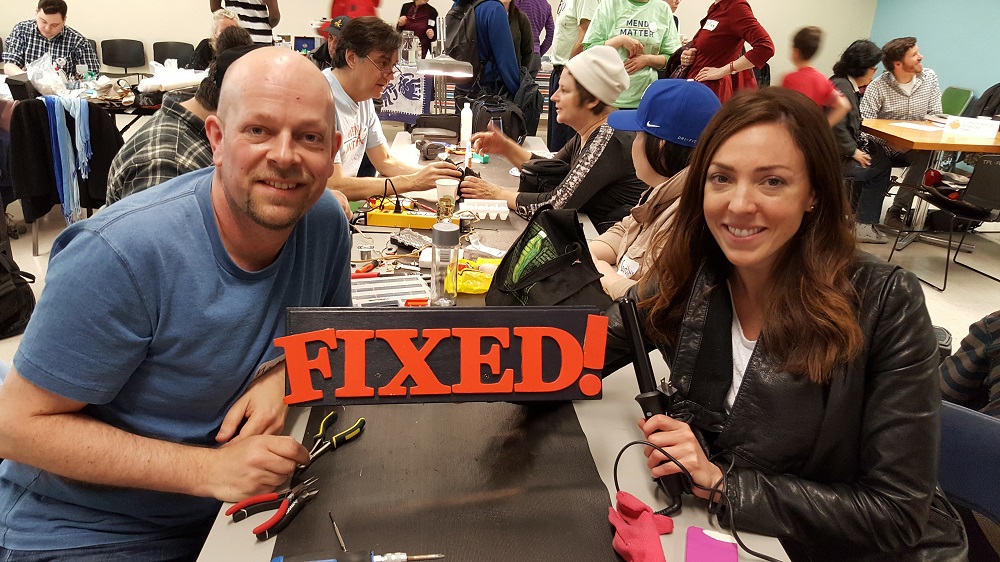 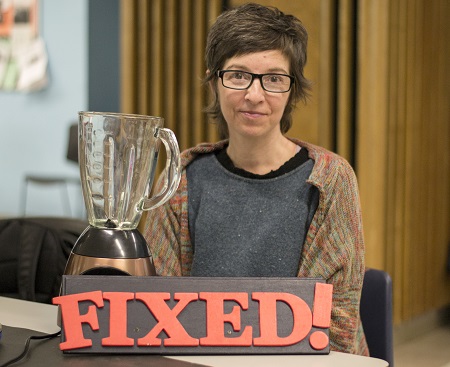 “This was really interesting in that it [the blender] was given to me second hand and I was never able to  make it work successfully. So, when I brought it here, there was all kinds of interesting gizmos and tools that were used to take it apart to have a look. It seemed as if it was a manufacturing flaw. But actually, what happened was that the person who had this previous to me, when they washed the blender, they put it back incorrectly such that the two mechanisms that have to come together to make the blade turn couldn’t connect because there was too much space between them. It was just a simple matter of moving the rubber ring that creates a seal from the lower part of it to the upper part. So, it wasn’t a mechanical issue at all. It was an interesting problem that it wasn’t really obvious.

I really enjoyed the fact that when the repair was in place, I walked through all the steps. It was explained what was happening and what they were looking for. I found it really educational! “ 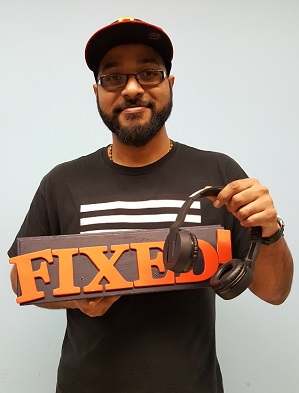 I’ve got my headphones fixed. They’re practically brand new. I’ve had them for a year but they broke about 6 months ago. The audio is great. I brought them to be fixed and they fixed them really well. And it actually looks still brand new. I’m going to put a design or a sticker on where they patched it. So, its going to look fancy nice and I look forward to that.

…The [Repair Café] experience is awesome. I really like the space and all the folks are really nice and all the fixers are super nice and kind. I met some really nice folks they even have an electronics recycling program which I really liked as well. I think a space like this is really important because it gives an alternative to consumerism… A lot of us have sentimental items that might break for whatever reason and you might not want to throw them away. So, you can get them fixed which I think is a really awesome alternative. “ 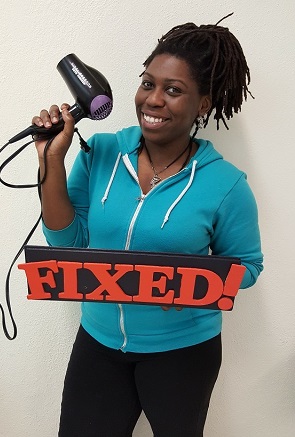 “I came here to get my VCR fixed as well as my blow dryer, and my pants. I [the pants] had a thigh rip. And I wanted to get that fixed as well. We couldn’t fix the VCR, but it was just interesting getting to see inside my VCR and all the mechanics involved. That was just interesting to watch. We fixed my blow dryer which is awesome because I got that in a bad bunch trade and now that bunch trade has been made better. These pants that I have, I have loved these pants for a year and they ripped. Now I can wear them for another two years and now I’m super happy about that.

I think the Repair Café is a great idea to take things that otherwise would go into the landfill, garbage or be donated or whatever and be able to reuse these things and give a longer life to them. So, I now have jeans that I can now wear for another year and I have a blow dryer that would’ve otherwise went to the landfill that I can now use again.”

It was great to hear the positive experience of our visitors. Our next Repair Café will be held at Skills for Change on Saturday, May 27. It is also our 4th anniversary event. For details, please go to the Upcoming Repair Cafés page.

Hope to see you there!